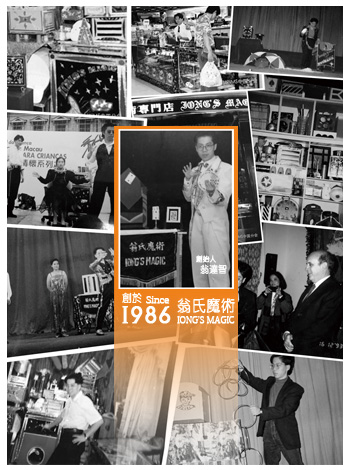 Iong's Magic & Co.Macao was found in 1986, founded by Macao famous magician RAYMOND IONG TAT CHI, which was the earliest magic group has been set up in MACAO.

During the twenties, Iong's magic is developing rapidly from a small group performance to the government invited and have many chances to perform in abroad. Now we have ability to organize the professional performance and we were well-known overseas. We have got many prizes and lots of super magicians were taken in our group, so it’s no wonder that we are the grandest magic amusement company in Asia.

Each show, we try our best to win the media's concerns and made the sponsors more famous in society so we help them to make a good profit from it. The artistic achievements: we have got over hundreds great prizes and neither a magic company could compare with us.

Iong's magic has lived all around the world and in many different cultures showcasing numerous World renowned magicians of Iong's magic. Over the years, Iong's  have had many long term partnerships with local gambling organisations in Macau, Government and private organisations, alongside with many main tourist attractions in China in hopes to provide our customers with the greatest effectiveness possible. Mr.Raymond Iong, the creator of Iong's magic established a series of “Grand Magic Show”since 2003, consisting numerous original themed magic shows beloved by audiences in China; Iong's magic is now currently one of the biggest organising responsible for magic shows in Asia.

The Iong's magic shop is situated in Macau, a magic store filled with unique features and theme directly operates from the owner Raymond Iong himself. The shop consists of several thousands of different types of magic tools for anyone to purchase, no matter from an amateur enthusiast or a World class magician. Also, ever since the debut of the shop in the Hollywood movie –"Now You See Me 2" and was described as the most ancient magic shop in the whole world, the IONG'S magic shop has became a new tourist attraction in Macau for movie and magic enthusiasts.

As a locally renowned brand, Raymond Iong and his team had been invited to various broadcasting units and stations to participate their events or shows as a guest performer or emcees of their magic shows; in addition to that, the team is frequently invited to act as a consultant of technical skills related to magic for movie producers. The professionalism of Iong's magic's team has become a well-loved and well-known brand of representing Macau's performing arts culture.

Since 1999, Iong's magic has had a plentiful of opportunities and experiences to represent China to participate in numerous internationally recognised Magic Competitions and achieve staggering results. Other than that, Iong's magic has produced series of classic magic shows which are globally recognised as a representative of great magic performances. Raymond Iong has also won the highest achievable award in the international magicians society-"Merlin Award" third time in 2011,2014,2017, making him the first ever Chinese to be presented with such award, establishing an important milestone of the significance of Iong's magic in the magic society